Shahrukh Nasim is a Business Analyst for the United States government, a writer and environmentalist. Shahrukh hopes to work towards the climate issue and help solve the energy crisis. He can be reached at shahrukhnasim@outlook.com or his social media @shahrukhnasim_ .

Ahmad Tipu is a senior at SUNY New Paltz studying International Relations hoping to work in public-private partnership to bring sustainable development to all. He is currently interning at Swarovski in their Corporate Social Responsibility Division and at the UN with the NGO Committee on Financing for Development. Ahmad can be reached at atipu10@gmail.com or on his social media accounts @ay_tipu.

Dia Mirza is an international celebrity and activist who has played a prominent role in the Indian film industry (Bollywood), as well as the environmental movement. She won her first major milestone award as Miss India Pacific 2000 and debuted in Bollywood in 2001 to revolutionize the industry forever. She is currently the United Nations UN’s environment goodwill ambassador for India. She is known to play a major role within the international community on a variety of issues including recycling, renewable energy and sustainable solutions to climate change. Her work is appreciated by fans, activists and public figures across the globe. We got a chance to hear her perspective on the energy and climate change issue within South Asia.

Electricity is a luxury commodity in South Asia. There are villages in Bangladesh, Pakistan, and India where there is no grid system. The blame goes towards the government for corruption but also the lack of utilization within resources. The concept of micro-grids and renewable energy is a champion solution; however, it will take some time in order to incorporate. Our main task is to find a solution that is environmentally friendly and sustainable. Climate change has been disastrous in South Asia and the Indian subcontinent. Sea levels are rising, heat waves are common in the coastal parts of Karachi, there is flooding in Dhaka and agricultural fields are ruined in India. It has even started a new wave of refugees called climate refugees. South Asia is on a new hunt for solutions to fight against this issue as it has affected everyone from poverty-stricken areas to the developed capitals. We spoke with Dia Mirza at the UNA Social Good Summit in 2018 to find out her perspective on this issue.

Shahrukh: My first question is what is your perspective on the current energy crisis in South Asia. There’s villages in rural parts that don’t even have electricity and what can the younger [South Asian] second generation from overseas do in regards to that?

Dia: Solar energy is making a big big difference. I can speak to the fact that there are many villages that have been electrified due to solar energy and we see a tremendous on the ground. It’s sustainable, it’s good, and I just hope that in the near future solar becomes more affordable so that more people can have it. I think more communities in this part of the world can help electrify villages through [the use of] solar energy. There are “solar mamas” that go to an incredible college in Rajasthan called Barefoot College where grandmothers are trained to be solar engineers. So there’s some incredible work happening and I think we just need to discover what that is and kind of nurture it and give it more momentum.

Shahrukh: Definitely! Do you think [even with] heat waves rising in the Indian subcontinent the younger generation has the ability to curb that?

Dia: Oh absolutely and I think that we will since globally given that we are the world’s second largest population soon to become the most populated we recognize that with the reality of climate change and the frequency and intensity of whether its floods or drought or you know every effect of climate change our people and our children are going to be most affected by it. So from not just a place of empathy but just a human responsibility we have to do more to conserve our one life [and] protect our forests because these really are the birth grounds of our water that will sustain life and sustain our people.

Shahrukh: Thank you so much. Do you mind if I get a picture? 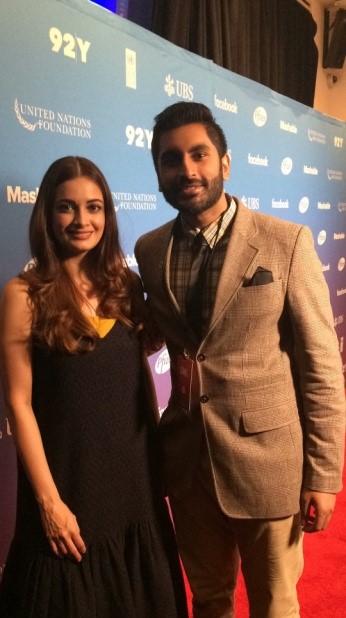